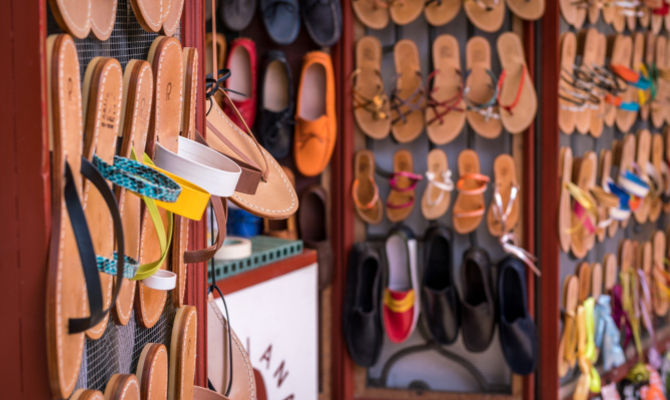 The sandal is considered as the oldest footwear ever known, but how did it become, with the passage of time, the garment typical of the Amalfi Coast to the point of being called “Sandalo Caprese” or “Sandalo Positano”?

Worn for the first time by the ancient Egyptians, “inventors” of the first model of flip-flops, the sandals were then universally associated with ancient Rome where everyone, from the people to the emperors, wore these comfortable and resistant footwear.

From Rome, even from ancient Egypt, why are they now associated with our Divine?

The Roman emperor Tiberius, who can be defined as the first “influencer” in history, used to run away to Capri and, once he retired from political life, it was there that he settled.

Those particular low sandals fastened to the ankles became a must for all islanders, until they expanded throughout the Coast:  here is the reason why they are called “Sandalo Caprese” or “Sandalo Positano“.

The tradition continues to this day, where through the narrow streets of the various villages of the Amalfi Coast there are workshops of artisans who work in close contact with tourists, becoming themselves local attractions, so much so as to win over several characters of the star system, from Bridgette Bardot to Sophia Lauren.

The most famous shop in Capri is perhaps that of Amedeo Canfora, born in 1946 in Via Caramelle, where the “K model” sandal was created, dedicated to a special person: Jackie Kennedy.

We also suggest the boutique Cuccurullo Capri Sandals that produces sandals for Men, Women and Children since 1950.

From simple leather shoes and laces, the Capri sandals, year after year, are embellished with increasingly precious materials and applications, until the modern birth of the Jewel Sandals, a show to wear to give a fashion touch to summer outfits.

Appetizer? The answer is very simple: "Spritz". The Venetian cocktail is now a must but…

The bathing establishments close, the swimsuit is replaced by the coat and the colors change,…

Herculaneum: a must to visit