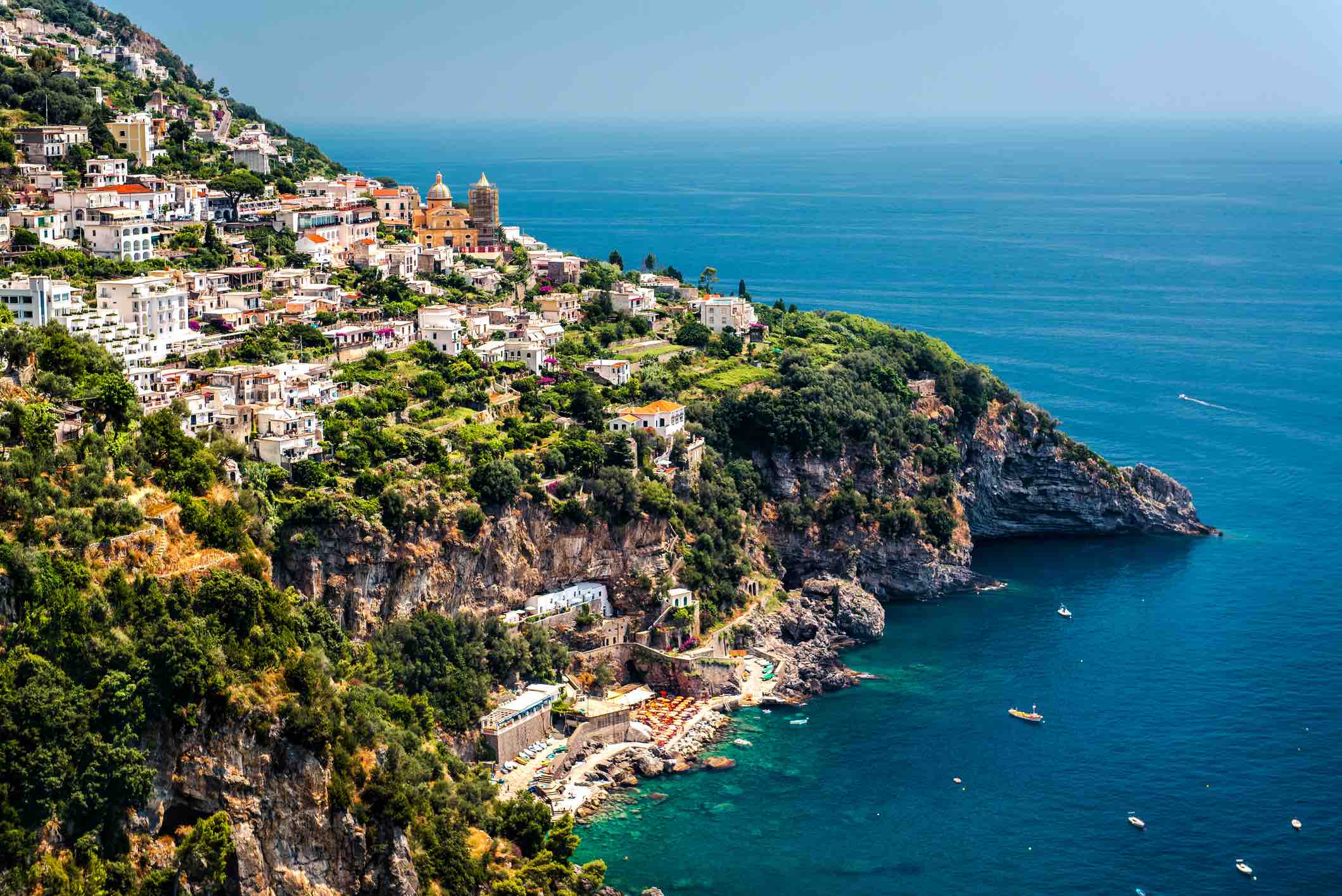 Located half way through between Positano and Amalfi, PRAIANO AND VETTICA MAGGIORE are two ancient centers like all villages of the Amalfi Coast extending from Vietri Sul Mare to Positano.

Praiano, the Ancient Plagianum, faces the east and enjoys the splendour of dawn and the rising sun in the morning and the moon at night, whereas Vettica Maggiore looks towards the West, with the sun setting on Capri’s Faraglioni sea stacks.

Praiano has always been remembered as a fishing town, since until one decade ago fishing was the only living resource for its inhabitants. In ancient times, this town used to be far closer to the sea, but due to some natural disasters, such as seaquakes, pestilences and aggressions by Arabs and Turks (the Saracens), for security reasons, its living nucleus was moved to higher ground and the coast was fortified with watchtowers during the Angevin period, and later with defense towers during the viceroy period.
The “Praianese” built their homes with ribbed barrel vaults, laying them down as eagles’ nests, by exploiting these places, sometimes hostile and deteriorating into the sea, as best they could. They created terraced walls with local stones built as dry-stack walls for water drainage and used them for various types of plantations.

Therefore, most of the population, in addition to fishing, became expert at cultivating citrus fruits, potatoes, tomatoes, various types of vegetables, vines, grain and barley. It is no coincidence that Praiano’s coat of arms is adorned with three oranges.

In the Angevin period, Praiano was honored to be elevated to the status of “Universitas”, a title given to villages with a certain degree of autonomy and prestige while remaining, however, always aggregated to Amalfi up to the XVII century and contributing to tax functions. So much so that, from the notarial acts of the IX and X sec., we found many Amalfi patrician families owning houses and land in both Praiano and its hamlet of Vettica Maggiore.
Other profitable activities carried out over the centuries were the art of silk and twisted yarn, spinning and bleaching flax, hair and fishing-nets processing.

Men, in addition to being good fishermen, sailors and peasants, were also skilled corallers, and thereby highly demanded on the “coralline” (coral fishing boats) of Torre del Greco in the province of Naples, a fact reported since 1400.

Once, the hub of the village economy was the historic hamlet of Marina di Praia, where various activities were carried out, such as boat building, fishing nets, yarn, anchovy and sardine brining, the production of cordage made of “lebanon” (a plant found throughout the coast), and the sale of lumber that was brought here by cable cars from Agerola and then embarked for and sold on African shores. In 1924 a terrible flood almost destroyed Marina di Praia.

Marina di Praia and Cala della Gavitella, the other Praiano beach, were also landing places with several “magazzeni”, warehouses where goods (such as flour, fish, grain, building material, etc.) were stored for the needs of the population.

Another element that characterized Praiano and Vettica Maggiore was the large number of churches spread all over the area: there were about 15 of them in addition to other as many chapels annexed to noble houses.
In the hamlet of Vettica Maggiore, the church of San Gennaro was built in the mid-1500’s, whereas toward the end of the XVI century a church dedicated to Saint Luke the Evangelist was erected in Praiano.

Set in the mountains, surrounded by rich Mediterranean vegetation, Positano is such a picturesque village…

An isle featuring a landscape of wild beauty sculpted by the wind, the sea and…

The Li Galli islands make up a tiny archipelago between Capri and Positano, one of…